This post was anonymously written as part of Blog Secret Santa. There's a list of all Secret Santa posts, including one written by Pamela Drouin, on Santa's list of 2013 gift posts.

Welcome to what will probably be the second ever post on Pamela Drouin's Silvrback blog. I'm Secret Santa, and I'll be your anonymous author. Merry Christmas, everyone! And an extra-special Christmas greeting to you, Pamela.

Pamela, I'm not going to lie. It's a bit difficult turning up and finding a blog with only one post on it. Luckily, that one post links to the piece you wrote for Medium, She who ships, wins…but for perfection. Nice title! And it was the first thing you ever published online, which is cool.

But more than that, it's something interesting to talk about. If I may quote you:

If I've been on the internet since 1991 (give or take a year), why has it taken me so long to write a freaking post? Well, let me admit it.
Hello, My name is Pam and I’m a perfectionist.

This teaches me two things: why there's not a lot of posts here for me to work off, and that you sometimes go by 'Pam'. Pam, I'm Santa, and I'm okay with you being a perfectionist. It's just a matter of what you want to be perfect.

I write my ideas down in scattered places, both electronic and physical, but my interest fritters away or my mind moves on to some other idea. Invariably, the fruitless pattern repeats: scraps of paper lost, electronic notes buried in avalanches of saved but unorganized data.

I have a growing pile of notes and half-ideas jotted down, too. Most if them are in a folder labelled "Ideas". (How sad is that? What a cruel thing to do to ideas!) Here's something that I've had filed away and labelled as a "Stray" for almost two years now:

The internet is an archive.
Content is a conversation.
Shit.

[Pam, if you email secretsanta[at]csworkflow.com, he'll pass on a photo of the note I'm talking about, so you can add it to this post.] 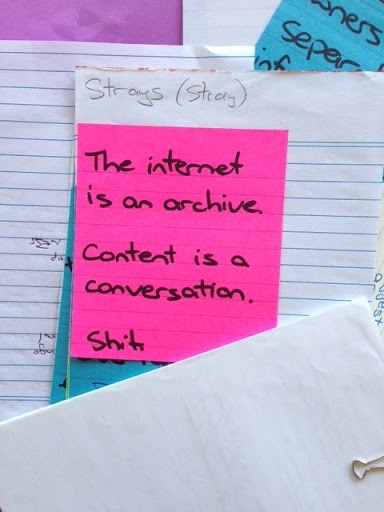 The internet is an archive

When content goes live, it could stay out there forever. Everything you do online is pretty much part of a huge, experimental, globe-spanning time capsule. You're building an everlasting version of yourself that people will have access to forever, no matter where or when they are. If the internet is a great big archive, you're under a lot of pressure to be at your very best every time you make an appearance. That's capital-F Freaky if you dwell on it for too long (like, say, since 1991).

At least, that's one way to worry about it. But on the other hand, everyone everywhere is helping to build a growing store of nearly everything. Everything! This isn't something you want to miss out on, right? How terribly imperfect is it to have a bunch of thoughts sitting in your head, or on note paper that you keep hidden away, while you have the chance to add them to the greatest, most honest store of human knowledge and endeavour that we've ever built? How can you NOT throw in what you have to say?

The best content isn't an addition to a staid, consequential archive. Do you know why civilizations build such pretty libraries? Because most of the books inside are boring. Don't sigh. Don't. It's true. You don't believe me? Go read 'em.

Anyway, forget about grand world-encompassing archives. The best content is a conversation. The greatest thing about the internet isn't the vastness of what's already there, nor the depth of stuff it's retained, but the interaction. Look at us, Pam. I'm an anonymous blogger hundreds if not thousands of miles away from you, and - if I may speak freely for just a second - I think this is some pretty cool interaction we've got going on here.

The internet is not a bunch of stuff that our children's children are going to diligently read from start to finish. No! The internet is people! People having conversations!

And timeliness means getting your ideas out there as you have them, to see which ones spark something off in a reader. Timeliness means giving up on the third or fourth or fifth revision of a closing paragraph in favour of just publishing.

So, Pam: Shit. We're in a bit of a mess here. Sounds to me like you're worried about making sure that the internet doesn't archive anything imperfect with your name on it. Sounds to me like a lot of conversations are going un-had. What's on those notes? What are you holding back from us?

The perfect blog, to me, is one that gets across what you're thinking and who you are. It's not about every sentence being a tweetable masterpiece, or about every thought you share blinding me with brilliance and insight. In truth, that would be kind of exhausting.

No, the perfection I urge you to strive for is a perfect representation of your evolving thoughts. Short, half-prepared posts are some of my favourites to read. Titles like "Notes on an idea I had the other day" or "First thoughts on " tell me that you're sharing yourself - the actual you of today - with the rest of us. And isn't that what blogging's all about?